Japanese Vegan Soup (Kenchinjiru). Kenchinjiru is a flavorful vegan soup created originally as a Buddhist temple cuisine (精進料理) with root vegetables and shiitake and kombu stock. Kenjinjiru or sometimes spelled as Kenchin-jiru ("jiru" means soup in Japanese) derived its name "Kenchin" from "Kencho" – the Zen. Kenchinjiru (けんちん汁) is a hearty plant-based Japanese soup that's made with a vegan shiitake mushroom and konbu stock. 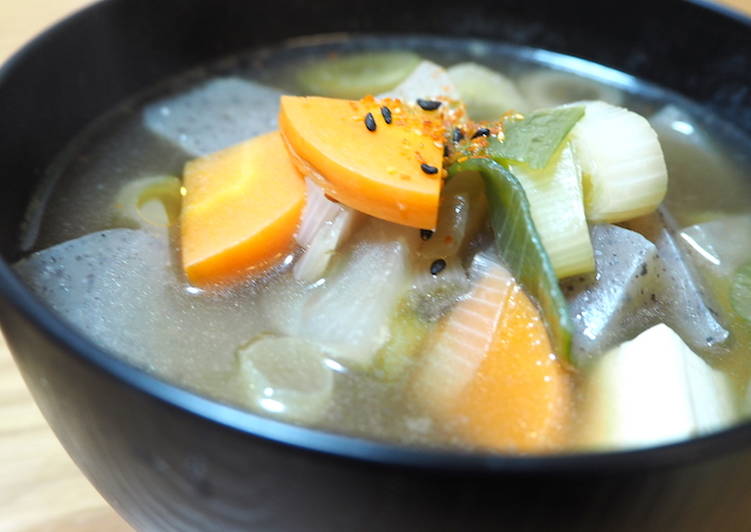 Japanese Vegetable Soup (Kenchinjiru) was originally a Buddhist dish that is vegetarian. Root vegetables and tofu are sautéed and cooked in flavoured dashi broth. Kenchinjiru (けんちん汁) is a Vegan Japanese Soup recipe that's made with a plant-based shiitake and konbu dashi stock. You can cook Japanese Vegan Soup (Kenchinjiru) using 11 ingredients and 9 steps. Here is how you cook it.

This savory vegan dashi is loaded with. This classic Japanese soup is hearty yet low in calories, full of fiber, and just all around good for you. It helps to counteract all the cookies and sweets you might be indulging in at this time of year. Since kenchinjiru is a shojin ryouri or temple cuisine dish, the basic version given here is vegan.

One of my favorites is kenchinjiru, a Japanese vegetable soup that is part of shojin-ryori (cuisine of Japanese Buddhist temple monks) and is filled with a cornucopia of Kenchinjiru traditionally is vegan, but I've seen many recipes that use a fish-based dashi or even add chicken to the soup. Kenchinjiru けんちん汁 (Japanese Vegetable Soup) – Originally created as a Buddhist temple cuisine, Kenchinjiru (けんちん汁) is a clear soup cooked with root vegetables, tofu, shiitake and kombu stock. It's a well balanced, flavorful soup if you're looking for a meatless meal on a cold night. The definitive guide to vegan Japanese food. Covers key ingredients, popular dishes, dining advice, as well as info about eating vegan in Japan.